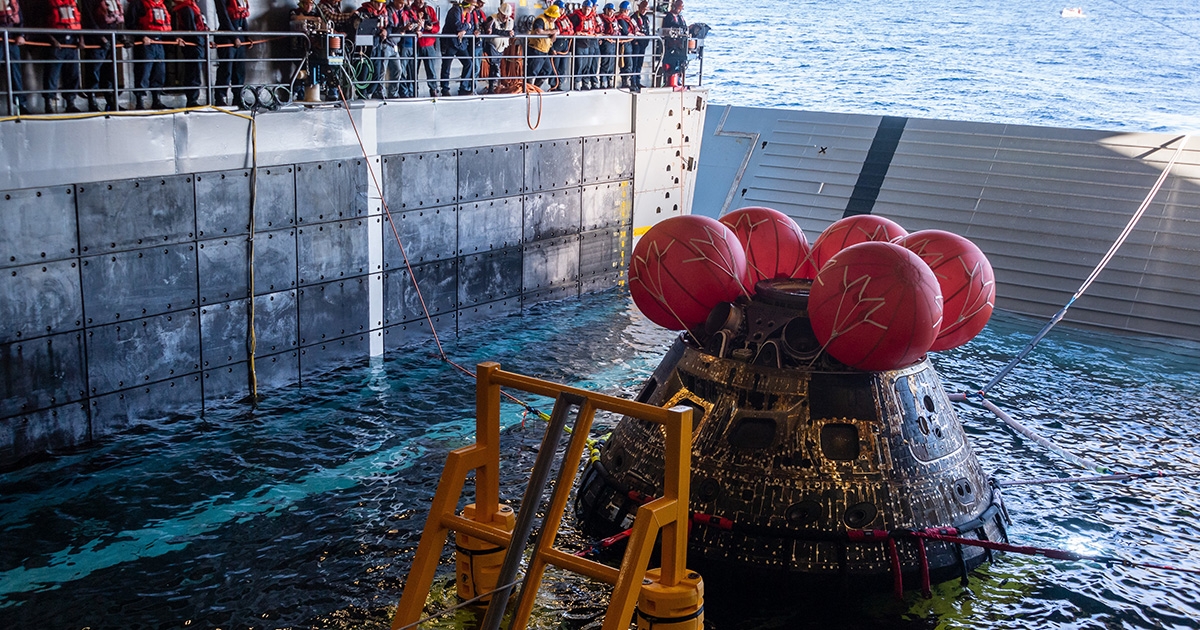 NASA chose to use these Navy surface ships due to their adaptable capabilities. Portland’s medical facilities provide at-sea support for ground crews and astronauts as needed, and embarked helicopters are poised to aid flight hardware recovery, conduct medical evacuation to shore, and collect imagery. Portland is equipped with extensive communication suites, enabling the multi-agency landing and recovery team to talk with the flight control team in Texas and NASA’s exploration ground systems team at the Kennedy Space Center in Florida.

“I am extremely proud of our team’s ability to execute a historic moment in history by successfully recovering the Orion capsule,” said Capt. John Ryan, commanding officer of Portland. “Each organization that participated in this mission underwent an extensive amount of training and our ability to work together as a unit demonstrates our adaptability and effectiveness as an amphibious platform.”

Montgomery, a surface warfare mission package LCS, provides flexible surface warfare capabilities like 11-meter rigid-hull inflatable boats (RHIBs) that could serve as surface connectors for ship-to-ship movements, flight hardware retrieval, and to move the capsule from the sea into the ship. The ship’s mission bay is large enough to store the capsule, and the flight deck can support MH-60S/R Sea Hawk helicopters or MQ-8C Fire Scouts. Montgomery was responsible for providing security in the area of operation and served as a back-up source of small boats.

"Our Navy has a long history of working with NASA spaceflight programs, and the Montgomery crew was truly honored to be a part of this historical partnership," said Cmdr. Edison C. Rush III, commanding officer of Montgomery “The successful capture of the Orion only motivates our crew to continue training and increasing our capabilities as a littoral combat ship.”

“We are extremely excited to have worked with the U.S. Navy to accomplish this mission,” said Melissa Jones, NASA Landing and Recovery Director. “For years our teams have trained together for this and could not be happier with how well the recovery mission was executed.”

Portland began early morning efforts to recover the Orion capsule with the launch of four small boats and two combat rudder raiding craft. The small crafts located the capsule in the open ocean, inspected the capsule, and rigged lines to the outside of the capsule to facilitate the movement toward the ship. Aboard those craft were Navy Expeditionary Combat Command’s EODESU-1 divers, who received vigorous training at NASA Johnson Space Center’s Neutral Buoyancy Laboratory. The highly trained Navy divers are proficient in open water and small boat procedures, adaptable to changing situations, excel at on-the-spot problem solving, and experts at salvage and towing operations. These expeditionary capabilities make them the ideal personnel to assist in the safe recovery and transportation of the Orion capsule from the ocean to Portland’s well deck. Following the launch of the small boats, Navy and NASA personnel rigged tending lines and guided the capsule through the water to Portland. The Orion capsule was then winched into place on the Orion recovery cradle assembly aboard the ship.