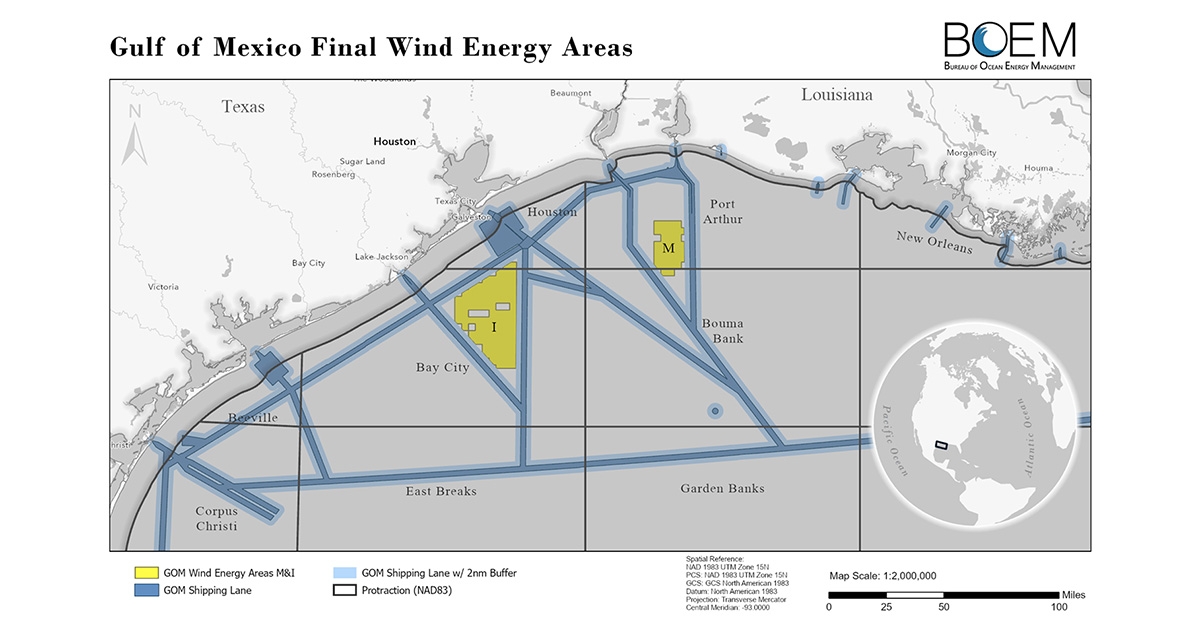 The Bureau of Ocean Energy Management (BOEM) has finalized two Wind Energy Areas (WEAs) in the Gulf of Mexico, with the potential to produce enough clean wind energy to power nearly 3 million homes.

A map of the WEAs can be found on BOEM’s website.

BOEM uses its renewable energy competitive leasing process to identify the offshore locations that appear most suitable for development, taking into consideration potential impacts to resources and ocean users. BOEM collaborated with the National Oceanic and Atmospheric Administration to build an ocean model that analyzed the entire Gulf of Mexico ecosystem to find areas that have the least conflict with other uses and the lowest environmental impact.

“These two wind energy areas represent exciting progress toward having the first offshore wind lease sale in the Gulf of Mexico, where there is a mature industry base and the know how to advance energy development in the OCS. The Region can play a central role in our nation’s clean energy transition to support good paying jobs, fight climate change,” said BOEM Director Amanda Lefton. “BOEM will continue to work with the coastal states and communities as we advance our work and do so in a manner that seeks to avoid or minimize conflicts with other ocean uses and marine life in the Gulf of Mexico.”

In July 2022, the Department of the Interior announced that BOEM was seeking input on two draft WEAs during a 30-day public comment period. Due to feedback received during a Gulf of Mexico Renewable Energy Task Force meeting, BOEM extended the comment period to 45 days, which closed on September 2, 2022. BOEM received 107 comments, which helped inform the final WEAs.

BOEM slightly reduced the size of the WEAs from their draft versions to address concerns expressed by the Department of Defense and the U.S. Coast Guard regarding shipping, marine navigation, and military operations.

The next steps in BOEM’s renewable energy competitive leasing process include issuing a Proposed Sale Notice with a 60-day public comment period later this year or early next year.

For more information go to: https://www.boem.gov/renewable-energy/state-activities/gulf-mexico-activities