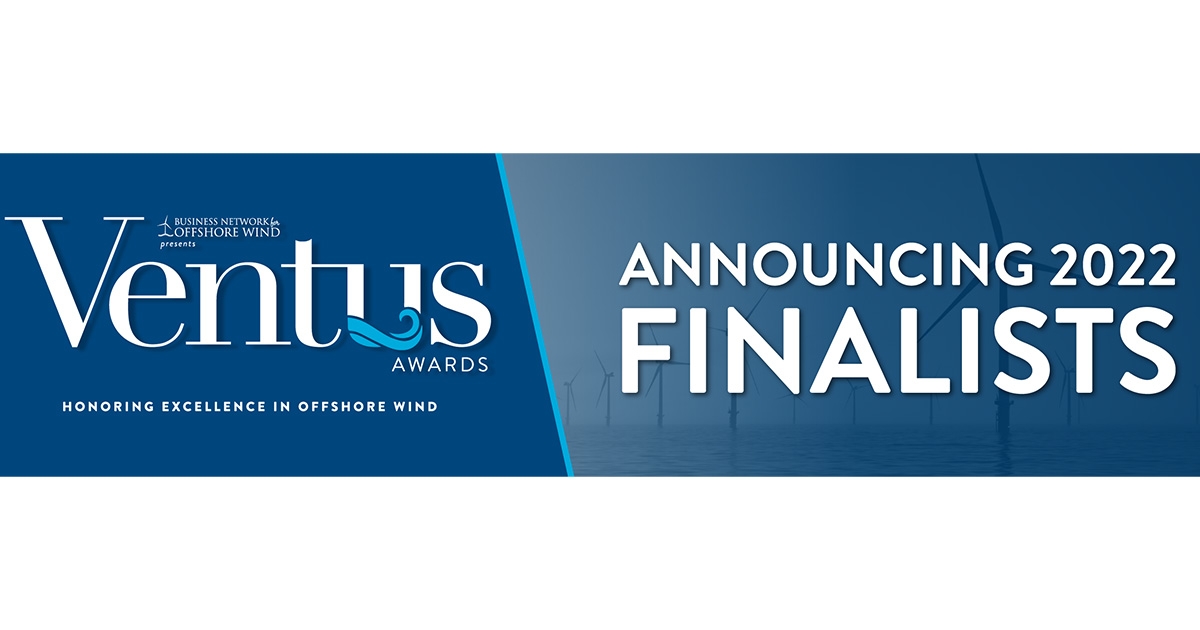 The Business Network for Offshore Wind, a leading non-profit working to accelerate offshore wind development and build a dedicated manufacturing supply chain in the United States, has announced finalists for the Ventus Awards.

In its second year, the Ventus Awards are the industry’s highest level of professional recognition, celebrating the cutting-edge innovations and the trailblazing people, companies, and organizations ushering in a new era for offshore wind energy.

Presented in partnership with Recharge, the finalists and winners will be recognized as part of the 2022 Ventus Gala on November 17 in Washington, D.C., the premier black-tie event where hundreds of professionals across the global offshore wind supply chain come together to celebrate the industry’s collective accomplishments as well as honor the leaders and innovators that inspire the industry with ingenuity and confidence.

“2022 has been a monumental year for offshore wind and these nominees are at the forefront of the tremendous progress that has been made across the industry,” said Liz Burdock, CEO of the Business Network for Offshore Wind. “From small businesses to multinational corporations, organizations and educational institutions throughout the supply chain are revving up for a clean energy transition dominated by offshore wind deployment and job creation. We thank all those who are dedicating their talent, drive, and commitment to improving the environment and advancing this industry. We look forward to celebrating their important work during this year’s Ventus Gala.”

“There is no more dynamic offshore wind market globally than that in the U.S., with the Biden administration’s ‘national goal’ of 30 GW turning by 2030 having set the stage for an industry-defining phase in the sector’s history,” added Recharge editor in chief Darius Snieckus. “But no one is under any illusions as the Herculean labors that face government, developers and supply chain alike. The Ventus Awards turns the spotlight on some of the many people and companies that are leading the charge with innovative strategies and technologies and most of all the future-minded thinking that will take offshore wind from vision to reality.”

Awards will be presented in eight categories designed to highlight the contributions and facets of the offshore wind industry on a global scale. Additionally, the Heronemus Award for Outstanding Achievement in Offshore Wind will be awarded to an individual who has contributed significantly to the expansion of offshore wind energy. The 2022 nominees include:

Advancement in Project Siting & Development
Given to an individual, team, or company that has developed a technology, process, or demonstrated immense effort and collaboration to advance or reduce offshore wind project development risk, cycle, or timeline.

Innovation of the Year
Singular innovation that will contribute to the acceleration of offshore wind.

Next-Gen Leadership
Recognizes a professional who is 35 years old or younger and has been in the industry less than ten years.

Supply Chain Advancement Award
Recognizes a company or public sector entity that is making a lasting contribution to the advancement of the offshore wind energy supply chain.

Viterna Award for Excellence in Engineering
Recognizes excellence in engineering that advances the offshore wind energy industry. Given to an individual or team, it is named after NASA scientist Larry Viterna who, with fellow scientist Bob Corrigan, developed the Viterna Method, which is the most widely used method to predict wind turbine performance and increase the efficiency of turbine output.

All Ventus Awards are open to nominations with the exception of the Heronemus Award for Outstanding Achievement in Offshore Wind.  Submissions were reviewed and scored by a Selection Committee of individuals that represent the breadth of the offshore wind industry. Winners will be selected by a distinguished Judges Panel, including Dr. Dan Arvizu, 28th Chief Executive of the New Mexico State University System; Denis Hayes, CEO of the Bullitt Foundation; Rose McKinney-James, managing principal at Energy Works; and Matt Petersen, president and CEO of Los Angeles Cleantech Incubator.