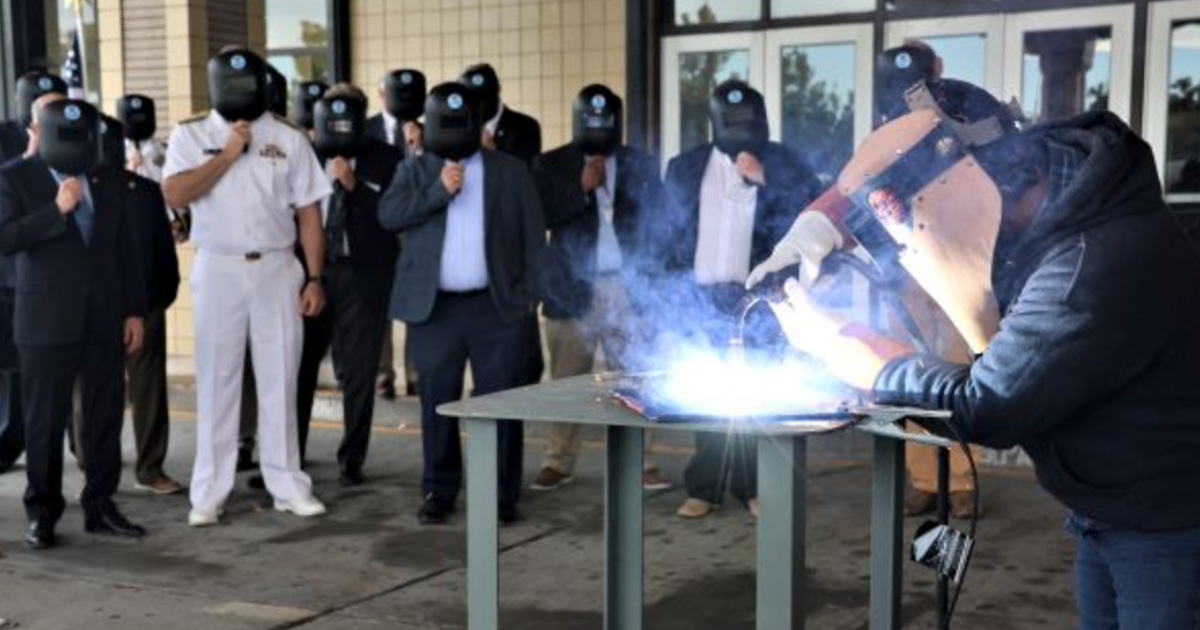 A welder from Thoma-Sea Marine Constructors, LLC, welds the initials of Discoverer's sponsor, Second Gentleman Douglas C. Emhoff, onto a steel plate that will be incorporated into the ship in keeping with maritime tradition. Credit: NOAA

NOAA, the U.S. Navy and Thoma-Sea Marine Constructors (TMC), LLC., held a keel-laying ceremony on October 28, in Houma, Louisiana, for Discoverer, a new oceanographic research vessel being built for NOAA.

The keel-laying ceremony marks the beginning of a ship’s construction. Second Gentleman Douglas C. Emhoff was named the ship’s sponsor. In keeping with maritime tradition, the initials of the ship’s sponsor were welded onto a steel plate that will be incorporated into the ship as it is built.

The 244-foot Discoverer will support a wide variety of NOAA missions, ranging from oceanographic research and exploration to studying marine life, climate and ocean ecosystems. Discoverer and its sister ship, Oceanographer, will incorporate the latest clean energy technologies, including vessel emission controls and high-efficiency diesel engines.

“We are excited to mark the beginning of Discoverer’s construction and couldn’t be more pleased that Second Gentleman Emhoff is serving as the ship’s sponsor,” said U.S. Secretary of Commerce Gina Raimondo. “His sponsorship of Discoverer reflects the Administration’s unwavering commitment to sustainability and the importance of advancing the collection of environmental data that we all rely on to keep our communities safe.”

Following an evaluation of potential locations in 2019, it was determined that Discoverer will be homeported in Newport, Rhode Island. The ship is expected to join the NOAA fleet in 2026 and will support ocean research, exploration and the development of new marine technologies to increase our understanding of the ocean.

The other new ship being built in Houma for NOAA, Oceanographer, will be homeported in Honolulu, Hawaii. The acquisition of Discoverer and Oceanographer is part of NOAA’s effort to revitalize and modernize its fleet of research and survey ships.

“TMC is very excited to begin construction on Discoverer, which will be essential to the continued study and monitoring of the health of our oceans,” said TMC Managing Director Walter Thomassie. “The highly collaborative effort by the Thoma-Sea, NOAA and U.S. Navy teams will result in a highly efficient, state-of-the-art vessel that will serve for many years with a reduced carbon footprint.”

The U.S. Navy awarded a $178 million contract in 2020 to TMC, LLC, for the design and construction of this new class of NOAA vessels. The new ships will operate with a crew of 20 and will accommodate up to 28 scientists.

“The Navy is honored to be partnering with NOAA as it begins the recapitalization of its fleet of oceanographic research vessels,” said John Lighthammer, U.S. Navy auxiliary and special mission shipbuilding program manager. “We are grateful to be on the front lines, working side-by-side with the various operators, scientists and acquisition specialists to make this program a success.”

NOAA’s fleet of research and survey ships is operated, managed and maintained by NOAA’s Office of Marine and Aviation Operations. NOAA ships are crewed by NOAA Corps officers and civilian professional mariners.