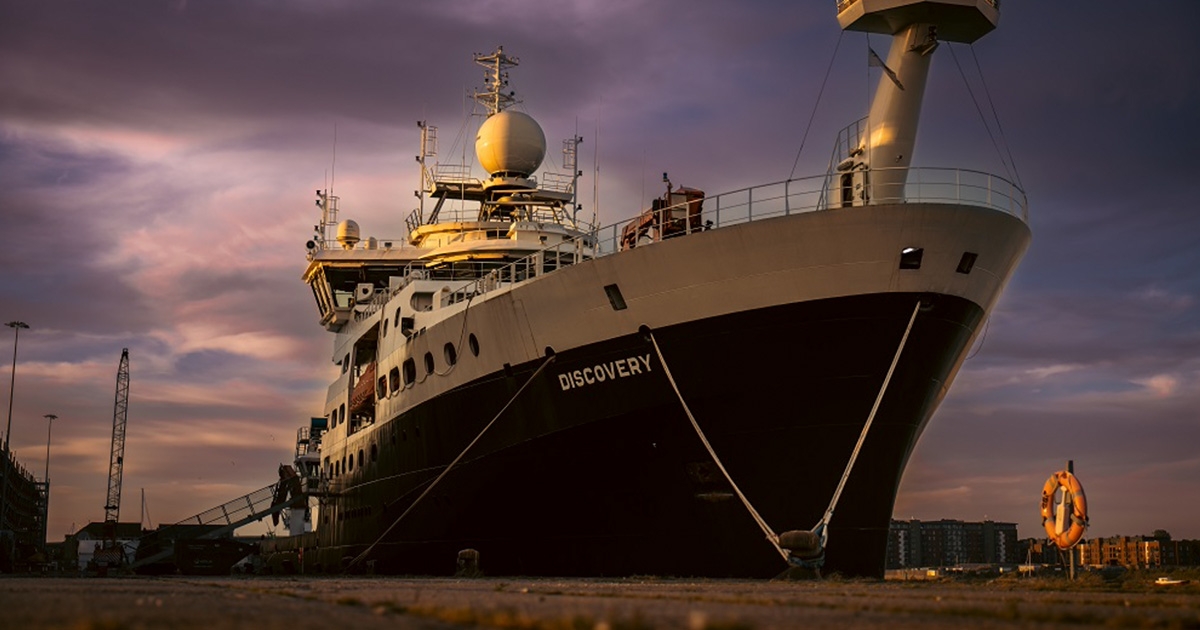 The RRS Discovery, operated by the National Oceanography Centre (NOC), embarked on a 9,000-mile expedition October 27, to conduct an extensive scientific survey within the South Atlantic ocean – and could even discover new species in previously unexplored depths.

Life on board Discovery

Scientists from the CEFAS-led expedition, and crew members from the NOC, will spend around 60 days at sea in total on board the RRS Discovery – a 100-metre-long research vessel weighing 600 tonnes.

The ship contains dry and wet labs for scientists to store and analyze the samples collected, as well as state-of-the-art survey equipment such as deep-water cameras.

Beyond the work of the expedition, Discovery will be the scientists’ home for this time, with facilities such as a gym, mini-cinema room and cafeteria on board.

During its 6-week voyage, scientists will complete a number of activities including:

Once the data and specimens have been collected, work will begin between experts in Ascension, St Helena and the UK to analyze key findings, with a report expected in 2023.

RRS Discovery departs on a six-week voyage from Southampton to the remote British Overseas Territories of Ascension Island and St Helena, supported by the UK Government’s Blue Belt Programme.

Using underwater cameras, scientists on board will study the region’s incredible biodiversity and explore hydrothermal vents on the seabed four kilometers beneath the surface.

There is a real chance the expedition will also discover species of the deep ocean unknown to humankind, which will be exhibited in the Natural History Museum upon the scientists’ return.

St Helena and Ascension are home to two of the world’s largest Marine Protected Areas and host a plethora of species, such as whale sharks, yellowfin tuna, humpback whales and green turtles. Yet despite their ecological importance, very little is known about their waters.

Underwater cameras, deployed as part of the Global Ocean Wildlife Analysis Network, will gather data that will significantly enhance scientific understanding of this unique marine environment.

The survey will further support the islands’ governments in sustainably managing our oceans – protecting them for future generations.

The ship is the latest research vessel to take Discovery name, following the original voyage that took Captain Robert Falcon Scott to Antarctica in 1901.

International Marine Minister Scott Mann said: “This vital expedition is using cutting-edge technology to explore untouched areas of the ocean and will potentially uncover rare species and habitats, allowing us to protect and enhance our marine biodiversity for the future.

“It demonstrates how our scientists are amongst the top in their field and marks a crucial step forward in our mission to protect 30 per cent of our international ocean by 2030, contributing to the global fight against climate change.”

Lord Goldsmith, Minister for Climate and Environment, said: “I wish the men and women of RRS Discovery every success in their pioneering mission. This is the latest example of British science leading the way in understanding and protecting our oceans for future generations.

“Following in the footsteps of the first Discovery voyage to Antarctica more than a century ago, this expedition offers an unrivalled opportunity to learn about marine life in some of the remotest places in the world.

“The knowledge the survey contributes will help us understand the abundance of rare species in need of our protection and I am incredibly excited to see what the scientists find.

“Our Blue Belt program - covering four million square kilometers of ocean – is determined to halt the alarming loss of biodiversity in our seas.”

Paul Whomersley, Scientific lead for Discovery 159, Cefas, said: “Globally only around 5% of the oceans have been explored, at a time when it’s never been more important that they are protected.

“This latest Discovery expedition provides a new opportunity to advance scientific understanding of some of the most remote and unexplored areas of ocean on our planet.

“Using the data collected and by growing our understanding of these biodiverse marine ecosystems, we can directly support Ascension and St Helena Governments in their work to sustainably manage their vast Marine Protection Zones.”