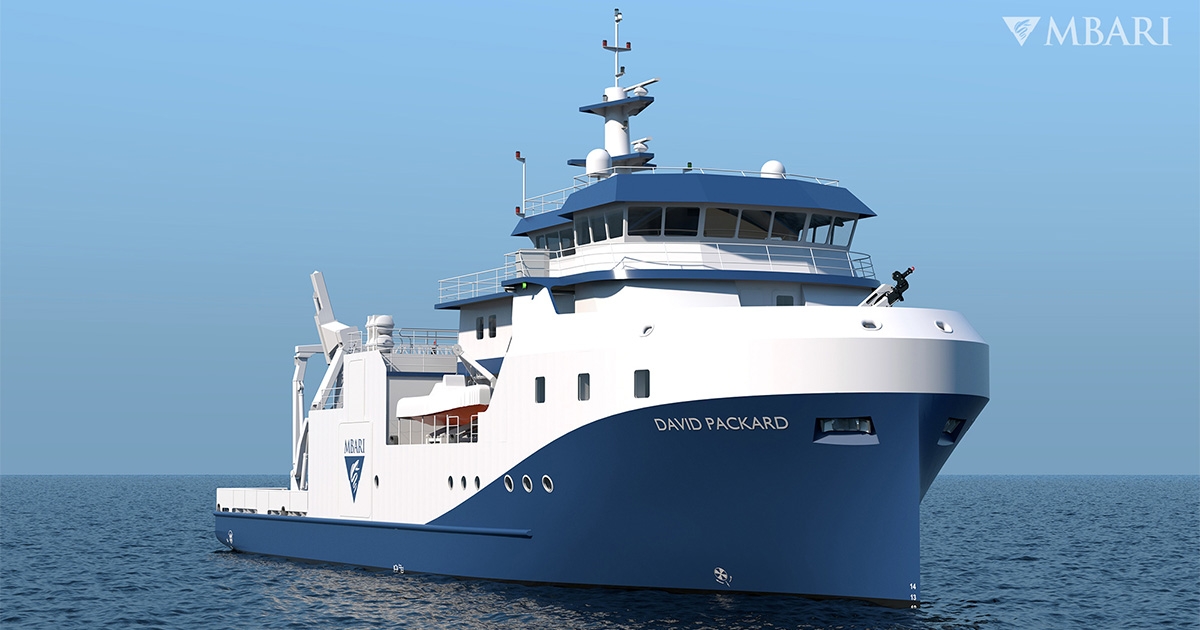 The R/V David Packard will usher in a new era for MBARI’s work. The new state-of-the-art research vessel is currently under construction in Vigo, Spain. MBARI will welcome the new vessel into its fleet in late 2023. Illustration: Glosten © 2021 MBARI

The 50 m-long research vessel, named in honor of MBARI’s founder, David Packard, is being built to undertake a diverse range of missions in Monterey Bay and beyond, supporting the institute’s mission to advance marine science and technology to understand a changing ocean.

Once operational, the ship will accommodate up to 18 researchers and will enable MBARI’s continued exploration of the deep sea, from the midnight zone to the abyssal seafloor. The R/V David Packard will be the command center for the ROV Doc Ricketts, MBARI’s deep-diving remotely operated vehicle. The new research vessel will also be capable of deploying a variety of autonomous underwater vehicles (AUVs).

Underpinning this deep-water capability will be Sonardyne’s Ranger 2 Ultra-Short BaseLine (USBL) system, with an HPT 7000 transceiver, which will be integrated into the vessel via a Sonardyne deployment machine.

The choice means the R/V Packard is the latest in a line of MBARI vessels to utilize a Sonardyne USBL system for its science missions. In fact, MBARI was an early adopter of Sonardyne’s first USBL system, installing it on the institute’s very first research vessel, Point Lobos (retired in 2012), in the early 1990s. The R/V Western Flyer, MBARI’s current flagship vessel that will be retired this fall ahead of the arrival of the R/V David Packard in late 2023, was also fitted with Sonardyne’s first USBL system and has upgraded over the years to the latest, industry standard Ranger 2.

Ranger 2 is also the preferred USBL solution for many of the world’s leading ocean research institutes, where efficient use of vessel time and accuracy are paramount. It provides researchers with the ultimate flexibility, with its capability to track and communicate simultaneously with multiple scientific instruments, vehicles or towed platforms, at ranges up to 10,000 m. With Ranger 2, operations from seafloor geodesy through to AUV survey missions are supported, anywhere in the ocean.

“The ocean is vital to life on Earth. In the face of rising threats like climate change, MBARI's work is more important than ever. We depend on a suite of diverse research tools to study the ocean. Sonardyne technology will help coordinate these instruments to give us valuable insight into a changing ocean,” said MBARI Director of Marine Operations Michael Kelly.

Geraint West, head of science at Sonardyne, commented, “We’ve had a long-running and close relationship with MBARI, so we’re really proud to be part of the next chapter in their story. At Sonardyne, we strongly believe in the critical work that MBARI is engaged in, as a better understanding of our changing oceans is critical to the future well-being of our planet.”

The ship is being built at the Freire Shipyard in Vigo, Spain and the order for the Ranger 2 system for the R/V David Packard was placed via Spanish integration company/agent EMA, Sistemas de Monitorizacion.

MBARI (Monterey Bay Aquarium Research Institute) is a private non-profit oceanographic research center, founded by David Packard in 1987. David Packard believed the ocean was the most important frontier we have left. He founded MBARI with the goal of establishing a new type of oceanographic institution—one where scientists and engineers worked side-by-side. The mission of MBARI is to advance marine science and technology to understand a changing ocean. For more than three decades, MBARI research has revealed the astounding diversity of life deep beneath the surface and provided important insights into the ocean’s geological, ecological, and biogeochemical processes. The technological innovation taking place at MBARI is helping to transform the field of oceanography and enhance the ability to address the urgent threats facing the ocean.