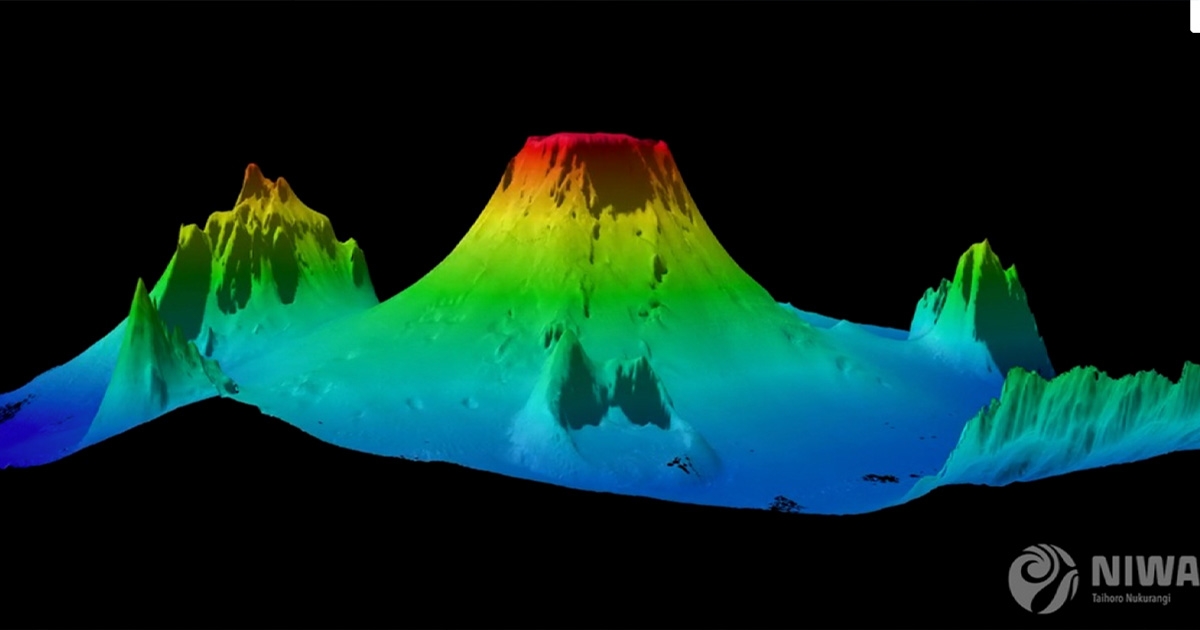 A New Zealand-led team has completed the fullest investigation to date into January’s eruption of the underwater Tongan volcano.

New Zealand's National Institute for Water and Atmospheric Research (NIWA) has discovered that almost 10km3 of seafloor was displaced – the equivalent to 2.6 million Olympic-sized swimming pools and a third more than initial estimates – with two-thirds coming from the summit and the rest from the surrounding flanks.

Three-quarters of this material was deposited within 20km of the volcano. This leaves almost 3.2km3 unaccounted for.

“This is why we didn’t notice the loss until we had mapped everything. The eruption reached record heights, being the first we’ve ever seen to break through into the mesosphere. It was like a shotgun blast directly into the sky. The volume of this ‘shotgun’ plume is estimated to be 1.9km3 of material, which has been circulating in our atmosphere for months, causing the stunning sunsets we saw following the eruption. This goes some way to explaining why we’re not seeing it all on the seafloor,” said Mackay. 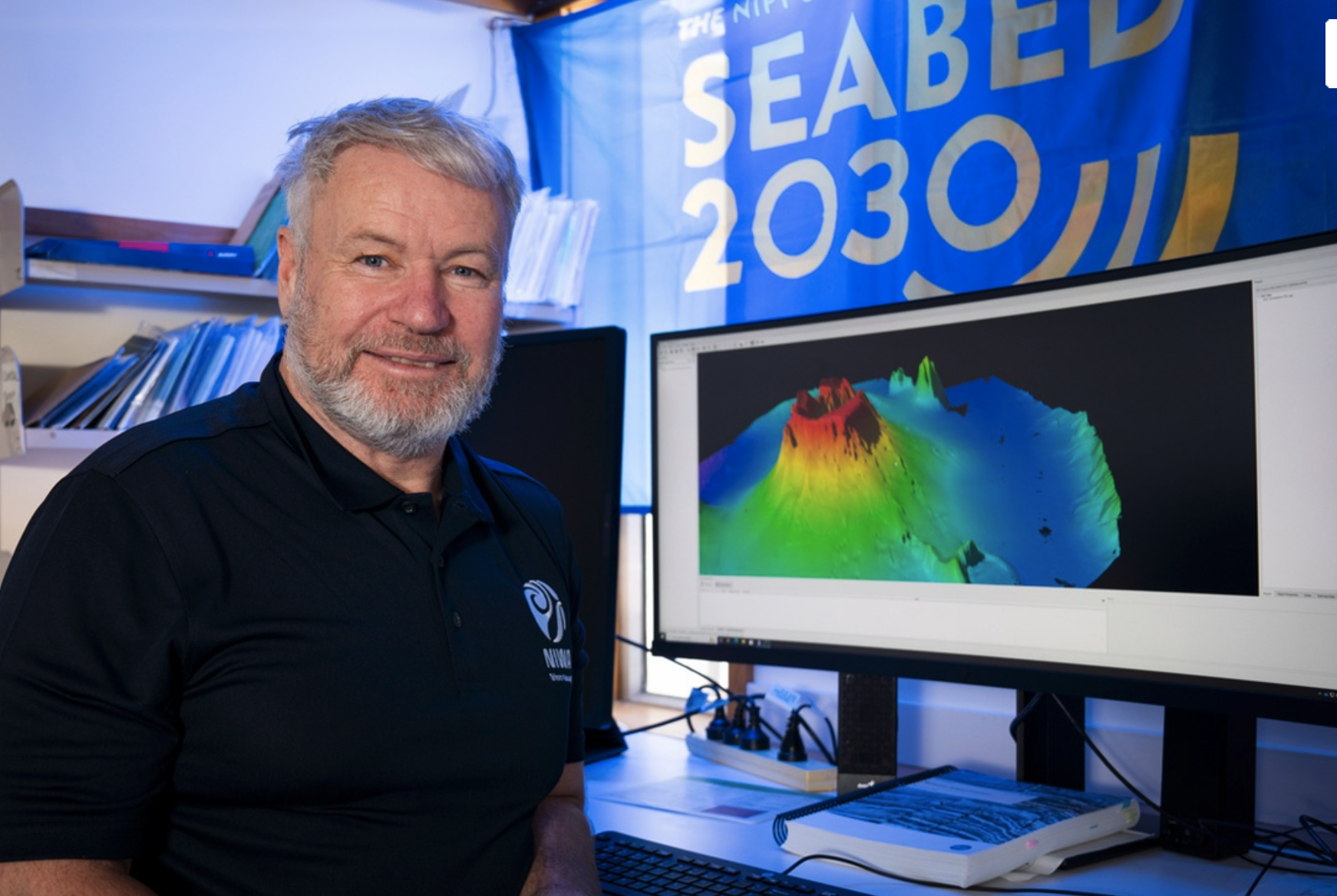 Despite the huge displacement of material, the volcano’s flank remains surprisingly intact. However, the caldera, or crater, is now 700m deeper than before the eruption.

Further evidence from the caldera shows signs that HT-HH is still erupting. A robot boat remotely operated from the UK by SEA-KIT International detected active venting from newly formed cones, explaining why glass fragments formed from cooled molten lava were picked up during NIWA’s earlier survey.

NIWA scientists have also unraveled one of the biggest unknowns of the eruption – the pyroclastic flows.

Pyroclastic flows are currents made up of dense lava, volcanic ash, and gases which can reach temperatures of 1,000°C and speeds of 700km/hr.

NIWA collected 150 sediment cores which were sent to New Zealand’s University of Otago and the National Oceanographic Centre in the UK for analysis. These samples showed pyroclastic deposits some 80km away from the volcano. But Dr. Emily Lane, NIWA Principal Scientist - Natural Hazards, believes they could have traveled even further. 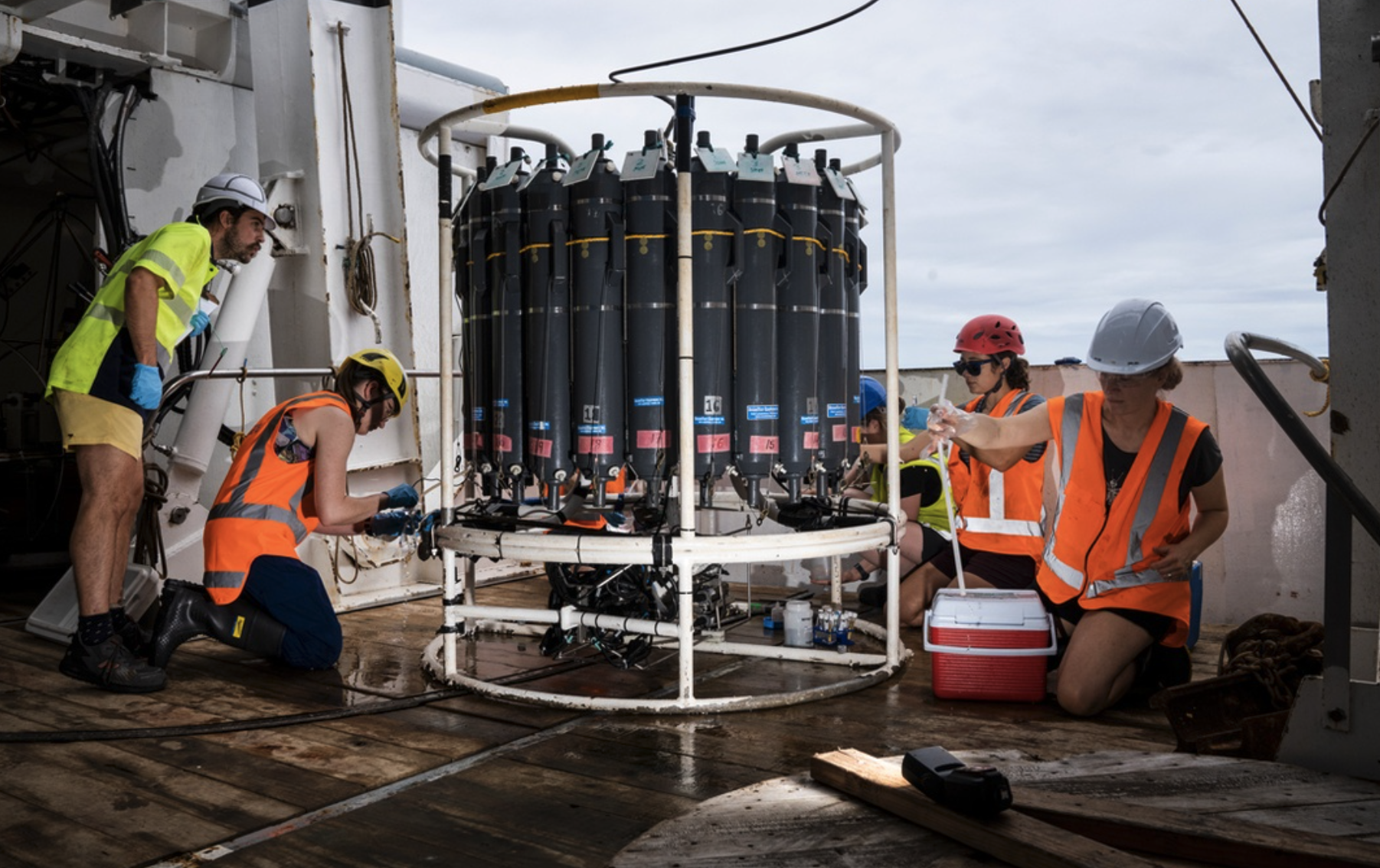 “Eighty kilometers was the end of our survey range, but the pyroclastic flows appear to extend beyond that distance, perhaps as far as 100km away. They are also what caused both the domestic and international communications cables to break, with the domestic cable now being buried under 30m of eruptive material.

“The sheer force of the flows is astonishing - we saw deposits in valleys beyond the volcano, which is where the international cable lies, meaning they had enough power to flow uphill over huge ridges and then back down again,” said Dr Lane.

On land, the heat from pyroclastic flows creates a frictionless boundary layer which allows them to move so rapidly, like how a puck glides on an air hockey table. However, Mackay says this is the first time that scientists have observed underwater pyroclastic flows of this magnitude.

“It’s the interaction with water that made this event so unprecedented. It’s still speculation but the latest science shows that this phenomenon may be more exaggerated under water. This could be why the pyroclastic flow travelled so far and with such force,” he said.

When heated, water can expand to around 1,000 times its volume. When you get several km3 of hot magma instantly hitting the cold saltwater, this reaction is supercharged, and all that energy must go somewhere – and the only options are to explode up or sideways out of the volcano.” 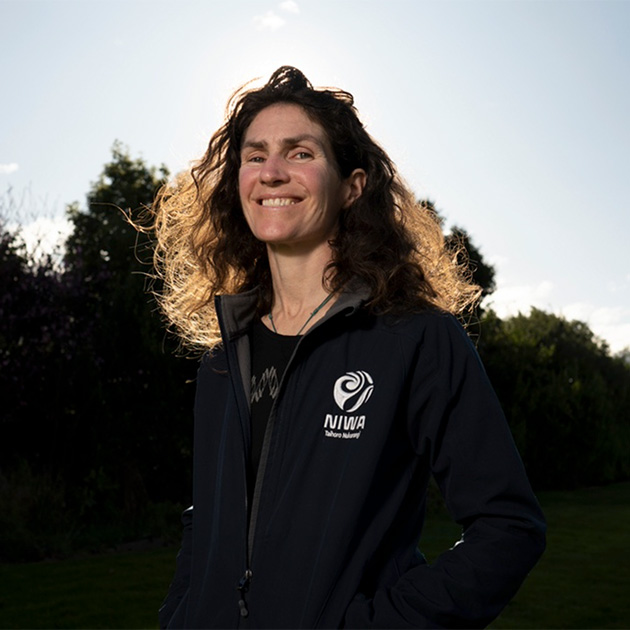 “While this eruption was large – one of the biggest since Krakatoa in 1883 – there have been others of similar magnitude since then that didn’t behave in the same way. The difference here is that it’s an underwater volcano and it’s also part of the reason we got such big tsunami waves,” said Mackay.

Dr. Lane said that because these volcanos are not just found in the Pacific, but the world over, we must know what happened and why it was so violent.

“The pressure anomaly generated by this eruption supercharged the tsunami so that it was able to travel right across the Pacific and world-wide. This mechanism meant that it could travel further and faster than our warning systems expected. The Krakatoa eruption was that last time a volcanic tsunami on this scale occurred,” she said.

The significant reshaping of the seafloor also had dramatic effects on ecosystems in the region. There was little sign of any animal life on the flanks of the volcano, in deeper water channels, and most of the surrounding seafloor. However, there were patches of abundant life that had survived the eruption on several seamounts, giving hope for recovery.

This video, shot on board NIWA’s Research Vessel Tangaroa, shows the scale of the HT-HH explosion and the findings of the resulting undersea investigations:

Supported by The Nippon Foundation, NIWA and SEA-KIT surveyed over 22,000km2 surrounding the volcano, including mapping 14,000km2 of previously unmapped seafloor as part of The Nippon Foundation GEBCO Seabed 2030 project, which aims to map the world’s oceans by the end of the decade.

Mitsuyuki Unno, Executive Director of The Nippon Foundation said that this work is vital to understand the science behind these types of events. 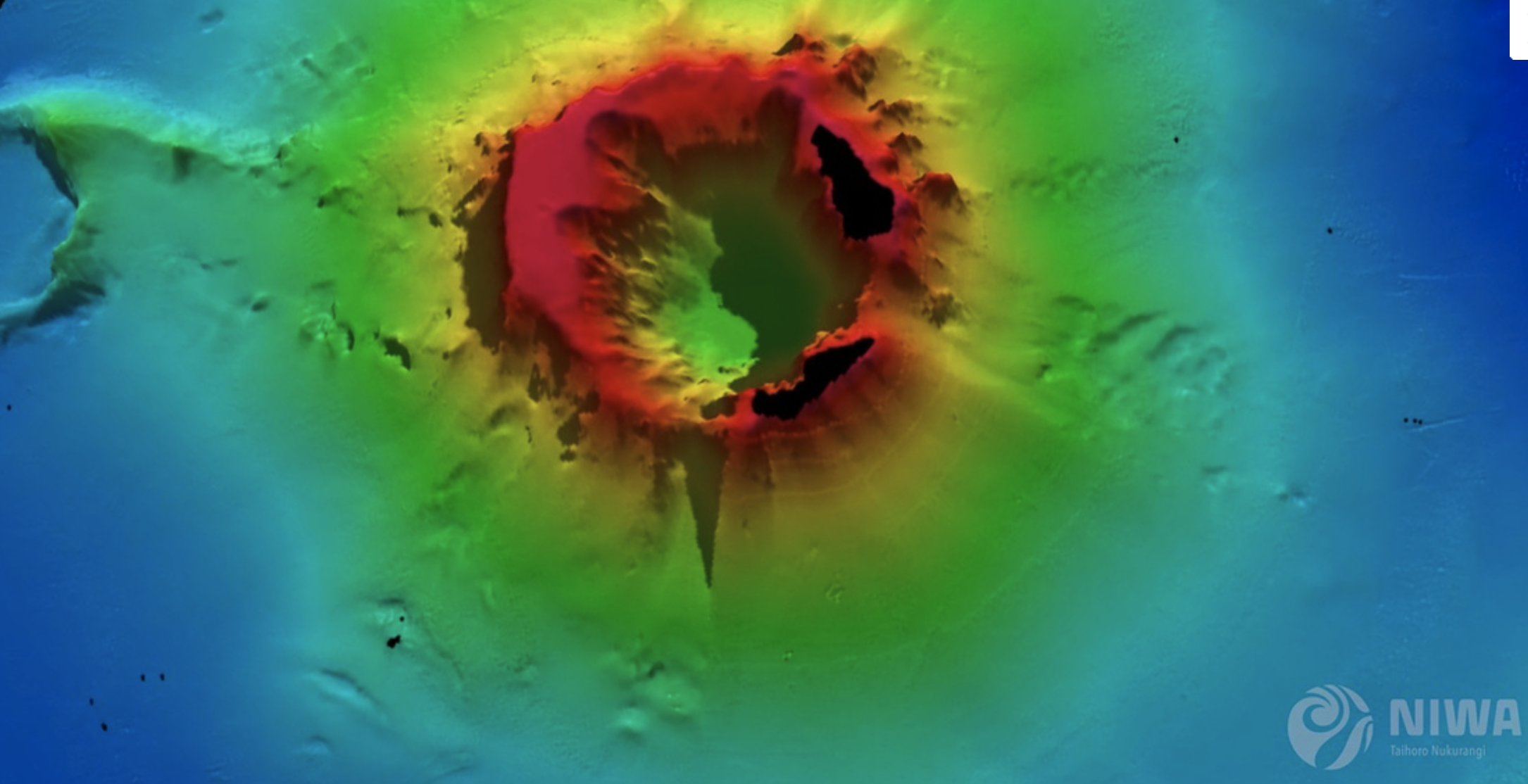 “The research has made clear that underwater volcanic eruptions have serious implications for coastal communities around the world. A huge proportion of the Earth’s population live on the coast, which are already vulnerable to the impacts of climate change, sea level rise, and big storms. We need to further our understanding of the risks from underwater volcanos so we can better prepare and protect future generations and their ecological environments.”

Jamie McMichael-Phillips, Project Director of The Nippon Foundation GEBCO Seabed 2030 project said that this project highlights the benefits of working in collaboration to collect fundamental knowledge of the ocean seabed.

“TESMaP is a fantastic testament to what can be achieved if we all come together in pursuit of scientific research. A complete map of the ocean floor is a necessity to protect our planet in line with the UN SDGs and our Seabed 2030 partners play an invaluable role in helping us realise our goal - as demonstrated by the truly collaborative nature of TESMaP." 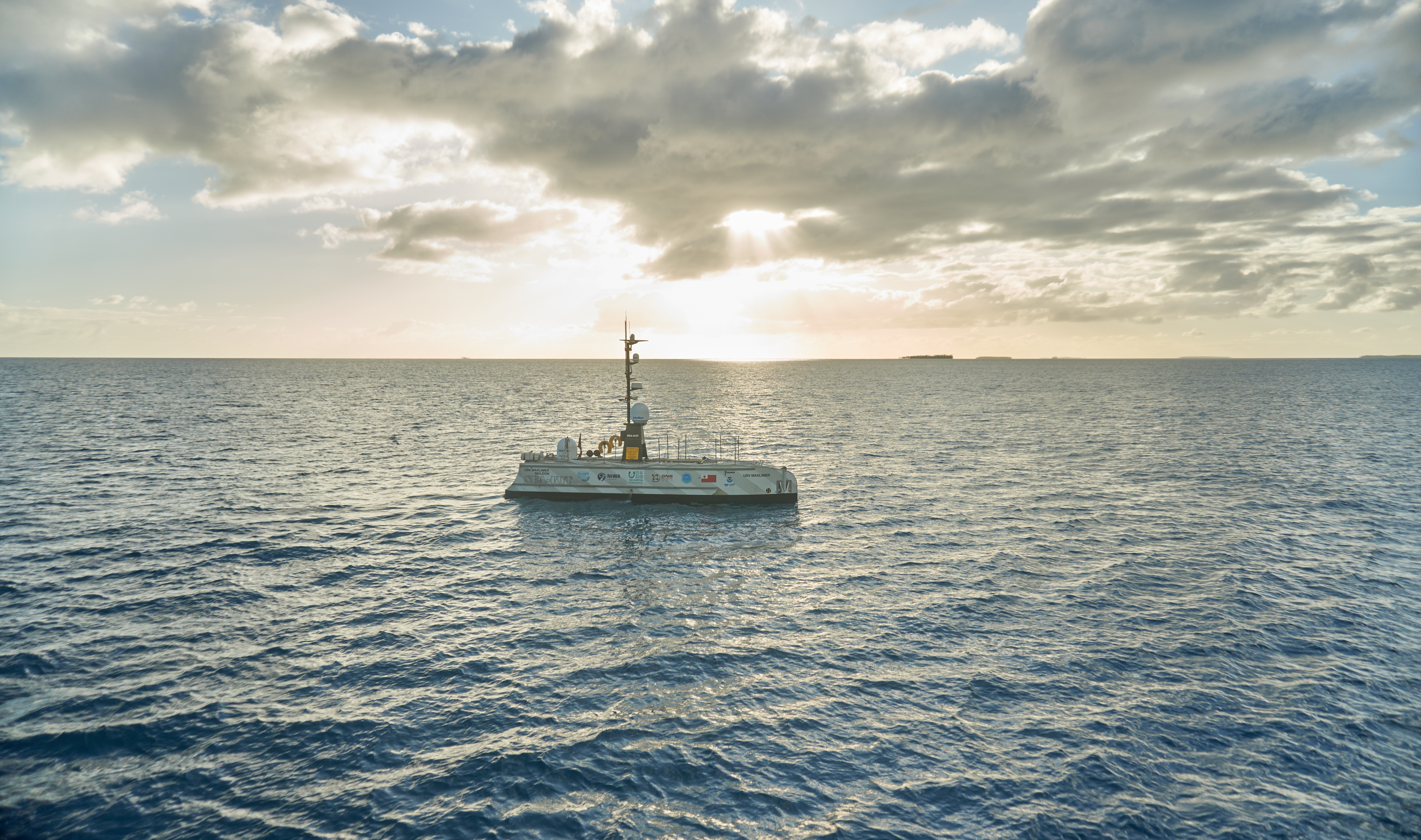 Ben Simpson, CEO of SEA-KIT said that their technology allowed scientists to undertake a dangerous and vital mission.

“We have been able to add new equipment to our proven X-Class Uncrewed Surface Vessel’s survey platform, such as winch and sensor cage towing capability, showing yet again the potential of uncrewed vessel technology to support and develop our understanding of the ocean. USV ‘Maxlimer’ provided a low risk, non-invasive survey solution for this challenging location, bringing down both risk and costs and reducing carbon emissions.”