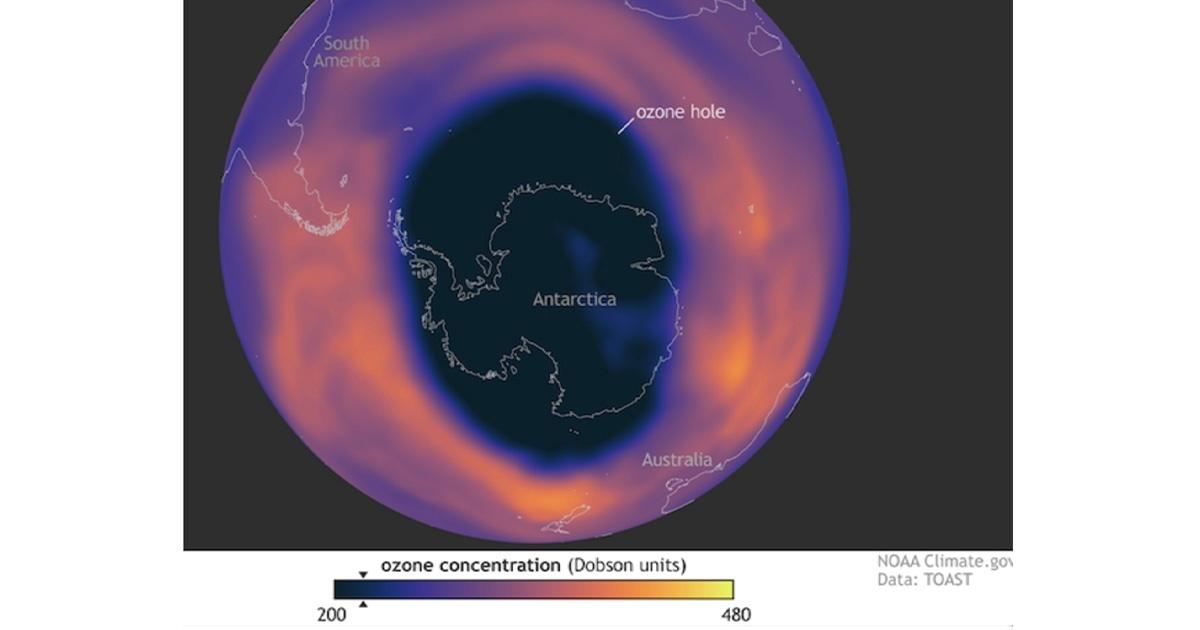 This visualization depicts the maximum extent of the 2022 ozone hole over Antarctica on October 5. Credit: Climate.gov

A new report from the U.N., which includes key scientific contributions from NOAA and international partners, confirms that the recovery of Earth’s protective ozone layer is on track, and that the Montreal Protocol, the international treaty that guides the phase-out of ozone-destroying chemicals, has had the additional benefit of slowing global warming.

The "2022 Scientific Assessment of Ozone Depletion" presents the updated status of the ozone layer, which is projected to recover by the mid-21st century to values observed in 1980, before the appearance of the ozone hole. The report also describes current challenges and future policy choices that could influence the ozone layer recovery timeline.

Ozone is a small and highly reactive molecule composed of three oxygen atoms. In the stratosphere roughly 7 to 25 miles above Earth’s surface, ozone molecules absorb some of the harmful ultraviolet radiation from the sun, protecting biological life on Earth.

Ozone depletion is caused by human-produced, long-lasting compounds containing chlorine and bromine, which persist in the stratosphere and act as catalysts for destroying ozone molecules.

After recognizing that the unregulated release of these ozone-depleting substances could eventually destroy the ozone layer, the international community adopted the Montreal Protocol in 1987 to phase out chemicals like chlorofluorocarbons (CFCs), which were commonly used in refrigerators, fire extinguishers, foams and many other products.

In addition to depleting ozone, CFCs are significant greenhouse gases, trapping extra heat in Earth’s atmosphere. By banning new production and use of CFCs, the Montreal Protocol eliminated a significant contributor to climate change, avoiding a potential additional global temperature increase of 0.5 to 1 degree Fahrenheit by 2100.

One family of CFC replacements known as hydrofluorocarbons, or HFCs, were found to be safe for the ozone layer but also act as potent greenhouse gases. In response, parties to the Montreal Protocol, including the U.S. signed the Kigali Amendment, which set controls on HFCs. Scientists estimate that this will avoid another 0.5 to 1 degree Fahrenheit of additional warming by 2100.

“This report shows that the Montreal Protocol is having a positive impact on our ozone layer, while also reducing climate effects of ozone depleting substances,” said Paul A. Newman, Chief Scientist for Earth Science at the NASA Goddard Space Flight Center, another co-chair of the Scientific Assessment Panel.

The report also identifies potential challenges that could interfere with ozone recovery. Proposals to slow rising global temperatures by injecting reflective particles into the stratosphere to reduce how much sunlight reaches Earth’s surface could potentially slow ozone layer recovery, along with potentially changing precipitation patterns and other unintended consequences. Likewise, anticipated increases in space travel and supersonic commercial flights emitting exhaust pollutants directly into the stratosphere could also impede recovery.

NOAA’s Earth Radiation Budget research program was created in 2020 to study the stratosphere in an effort to better understand these and other potential threats.

Approximately 230 scientists from 30 countries contributed to the 2022 ozone assessment, which is led by the World Meteorological Organization, United Nations Environment Programme, NOAA, NASA, and the European Commission. NOAA’s Chemical Sciences Laboratory led its production. Scientists from NOAA’s Global Monitoring Laboratory and Chemical Science Laboratory contributed key observational data, modeling and analyses. The assessment will be delivered to the U.N’s Ozone Secretariat this month.

To learn more about international efforts to recover the ozone layer, visit the U. N. Environmental Program Ozone Secretariat website at this link.