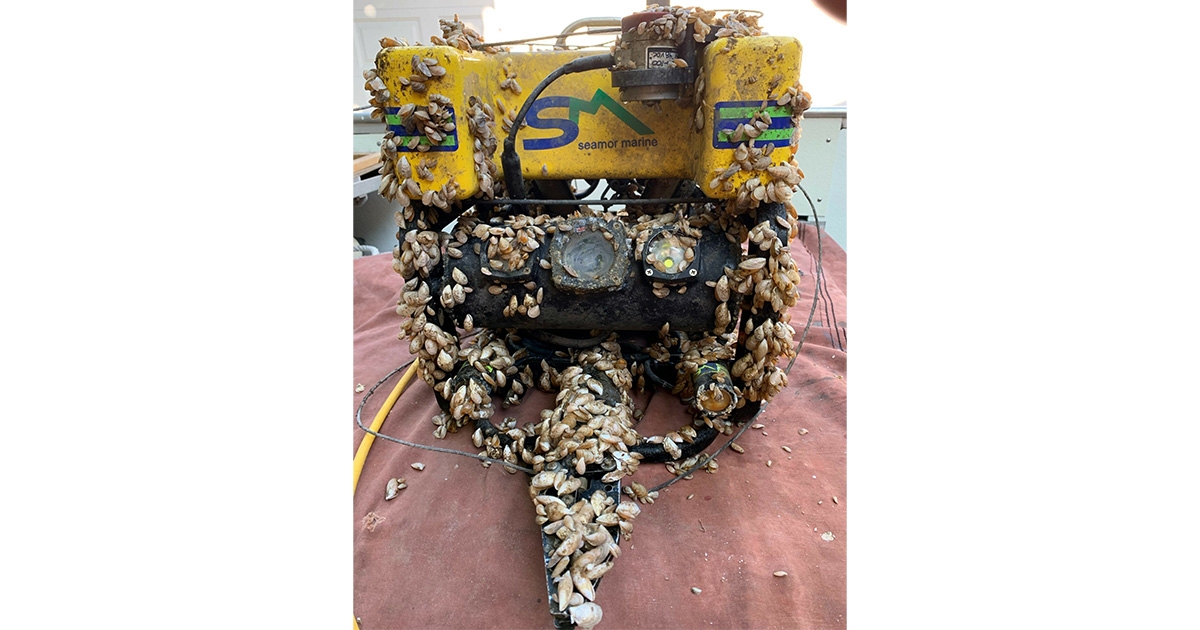 In 2014 a Great Lakes shipwreck hunter was forced to abandon his SEAMOR ROV in Lake Michigan at a depth of 134 meters (440 feet) after it became entangled in the 1929 shipwreck of the Senator, a freighter carrying 268 Nash automobiles from Milwaukee to Detroit.

The shipwreck hunter made multiple attempts over the years to recover his ROV and was finally reunited with his SEAMOR Legacy 300T in July 2022. Here’s the story:

While diving the wreck in 2014, the shipwreck hunter and four other divers were investigating the 125- meter (410-foot) freighter wreck when the SEAMOR ROV became tangled in a thick copper wire, the ship’s depth sounder line. They made, admittedly, ‘the classic mistake.’ Instead of letting the ROV work its way out of the tangle they pulled on the tether, which only tightened the knot.

After three or four hours attempting to recover the ROV, the shipwreck hunter abandoned the mission. He didn’t want to put a buoy on it because a freighter could come along and cut the line. Instead, he cut the tether and double sealed the end with epoxy and a section of hose and hose clamps from a patch kit on board. He then coiled the tether and added six pounds of weight onto it.

In the days that followed, weather conditions pre-empted attempts to retrieve the ROV. Eventually the shipwreck hunter was able to try again. He used a large grappling hook but, unfortunately, it cut the tether line and moved the ROV’s position. He then used a drop camera on a stick to search for the ROV and saw a shadow at the bow of the ship that looked like the ROV. After taking a photo and superimposing a SEAMOR ROV image over the shadow picture, he confirmed it was a match. However, weather, and the availability to find someone with an ROV to assist him delayed the search for several years.

Then in 2021 another ROV pilot contacted him and volunteered his ROV for the job. The shipwreck hunter was elated. Using the other ROV’s sonar, he located his lost SEAMOR ROV at the bow of the ship within 10 minutes. He gripped the tether and slowly pulled the tether to the boat with the coiled end and weights intact, raising the ROV from a depth of 131 to 79 meters (430 to 260 feet). But then the line became stuck.

He sent the other ROV to look again and realized the SEAMOR ROV was still caught on the depth sounding line. He tried to cut the line but, after an unsuccessful attempt, once again had to abandon the effort.

In October 2021 two boats returned to the wreck site, one carrying the ROV and electronics and the other with the dive equipment. Plagued with one-meter (three-foot) waves, he tried for three hours to attach to the ROV. Each time he tried to snag the line with the grapple hook a wave would hit and he would lose it again. Meanwhile in the cabin the ROV pilot was bouncing around trying to watch two screens. With conditions too risky to ask his friend to dive, the decision was made to abort again. 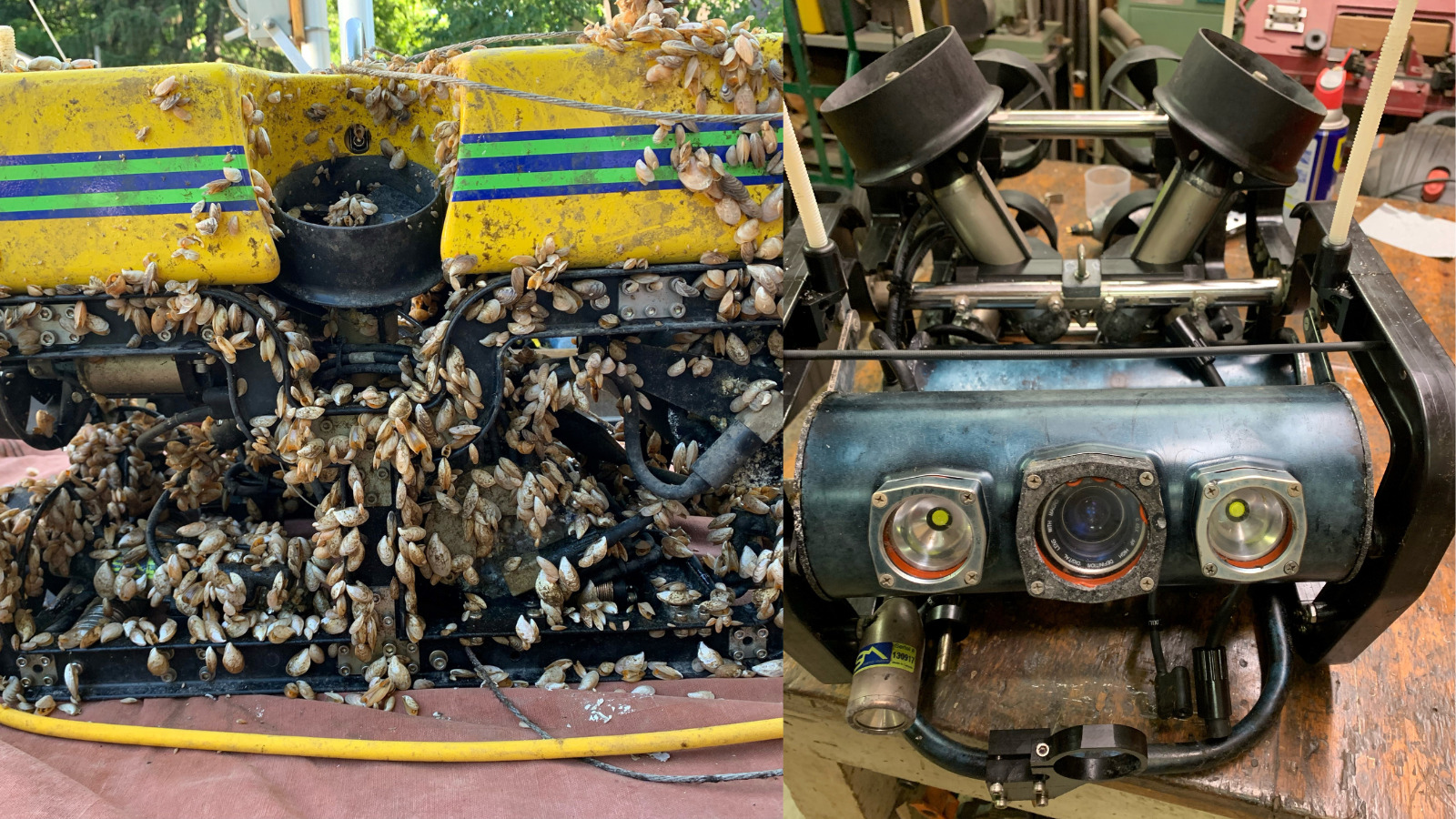 Before and after. Credit: Seamor Marine

Weather and availability of the other ROV once again delayed recovery attempts until late spring 2022. With a special cutter purchased and good weather, the shipwreck hunter and his crew were prepared for another try. They sent down the other ROV, attached a cable to the SEAMOR ROV, and raised the ROV back to the 79-meter (260-foot) depth. A diver descended the tether line, the anchor line to the boat. It took three minutes for the diver to reach the 79-meter (260 feet) mark and one minute to cut the cable. Once the diver safely resurfaced, the SEAMOR Legacy 300T was successfully pulled to the surface by hand.

After the successful recovery, the shipwreck hunter spent 12 hours power washing and cleaning his SEAMOR ROV then tried starting it. It fired up immediately! After spending eight years at a depth of 134 meters (440 feet) in Lake Michigan, the ROV had no visible leaks, only a bit of corrosion at both ends of the thrusters, and just two parts that needed to be replaced: the gripper and one light. The camera and lights worked for about 30 seconds, the propellers on the thrusters turned freely, the cylinder with the circuit boards was bone dry and the cylinder with the camera & lights appeared to be dry.

“What an advertisement if we can get it to work,” says the shipwreck hunter. “I would be amazed if any competitor could come close to making a similar statement. It’s a great story about a great product.”