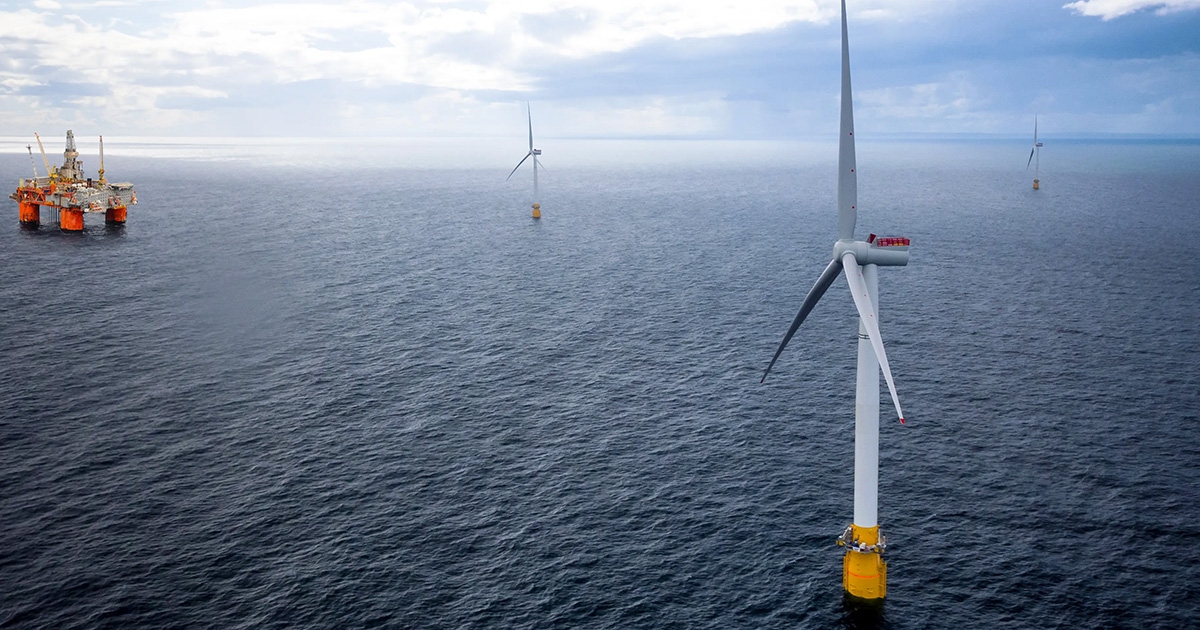 Equinor is close to first power from the world’s first floating wind farm to power offshore oil and gas platforms, Hywind Tampen, and preparing for the start-up of the world’s largest wind farm, Dogger Bank. Both wind farms are in the North Sea where Equinor has more than ten years’ experience from operating offshore wind farms.

At a press conference at the ONS conference in Stavanger 30 August, Equinor gave a status of Equinor’s offshore wind portfolio focusing on the North Sea.

“The North Sea will continue to play a key role for Europe’s energy transition and security towards 2050. The region is expanding from oil and gas production into a broad energy province utilizing world-class offshore wind resources. The North Sea is uniquely positioned to help meet European objectives of reliable, affordable and sustainable energy supplies. Renewable mega-projects like Dogger Bank and Hywind Tampen are nearing start-up, enabling Equinor to boost renewable energy to the European market. New projects such as Trollvind and Utsira Nord have the potential to deepen Norway’s lead in making floating offshore wind competitive and affordable,” says Pål Eitrheim, executive vice president for Renewables at Equinor.

Equinor’s offshore wind portfolio is progressing with several projects currently under construction that will be put into production the coming years. With this high activity level, there is no shortage of supply chain development, particularly as Equinor’s focus is on creating local economic value and jobs for host communities. At Hywind Tampen, Norwegian suppliers have secured about 60 percent of the contract value.

Once Hywind Tampen is completed, it will both be the first floating wind farm to supply electricity to oil and gas platforms, and also the world's largest floating wind farm. An important milestone was reached when the first subsea cables were laid and connection made to Gullfaks A recently. The seven first Hywind Tampen turbines will come on stream this year according to plan and the final four will be installed next spring.

The Dogger Bank project is moving forward and reached an important milestone when the first foundations were installed in July 2022. First power is expected in the second half of 2023, with commercial operations beginning in 2024 for Dogger Bank A, 2025 for Dogger Bank B and 2026 for Dogger Bank C respectively.

“The North Sea is a cornerstone for Equinor’s offshore wind business and will be a key hub for power generation for Europe for many years to come. With Dogger Bank and Hywind Tampen we are building on more than 15 years of wind farm experience and 50 years of experience operating in the harsh environments of the North Sea. Our first floating offshore wind farm, Hywind Scotland, has for several years reached the highest average capacity factor for any wind farm in the UK, and with floating wind anticipated to play a key role in the offshore wind industry of the future, Equinor is uniquely placed with our learnings,” says Trine Borum Bojsen, senior vice president for North Sea Renewables at Equinor.

Equinor and partners recently launched Trollvind, a 1 GW floating offshore wind farm outside Bergen with a potential start-up of operations in 2027.

Power from Trollvind can make a solid contribution towards electrification of oil and gas installations, deliver extra power to the Bergen-region and accelerate offshore wind development in Norway.

Increasing the size of wind farms is key to industrialize floating offshore wind and reduce costs.

By transferring offshore wind power to shore, as the Trollvind concept, this will enable the possibility to build a larger wind farm than one directly connected to oil and gas installations offshore.

Bringing the power to shore also promotes more efficient power utilization through better interaction with regulated hydropower and onshore industry. Increased access to power in this area also means improved security of supply for the oil and gas installations. Trollvind is located in a geographical area that is well known by the industry and the concept is now being further matured aiming at an investment decision during 2023.