Tidal Turbine to Light the Thames 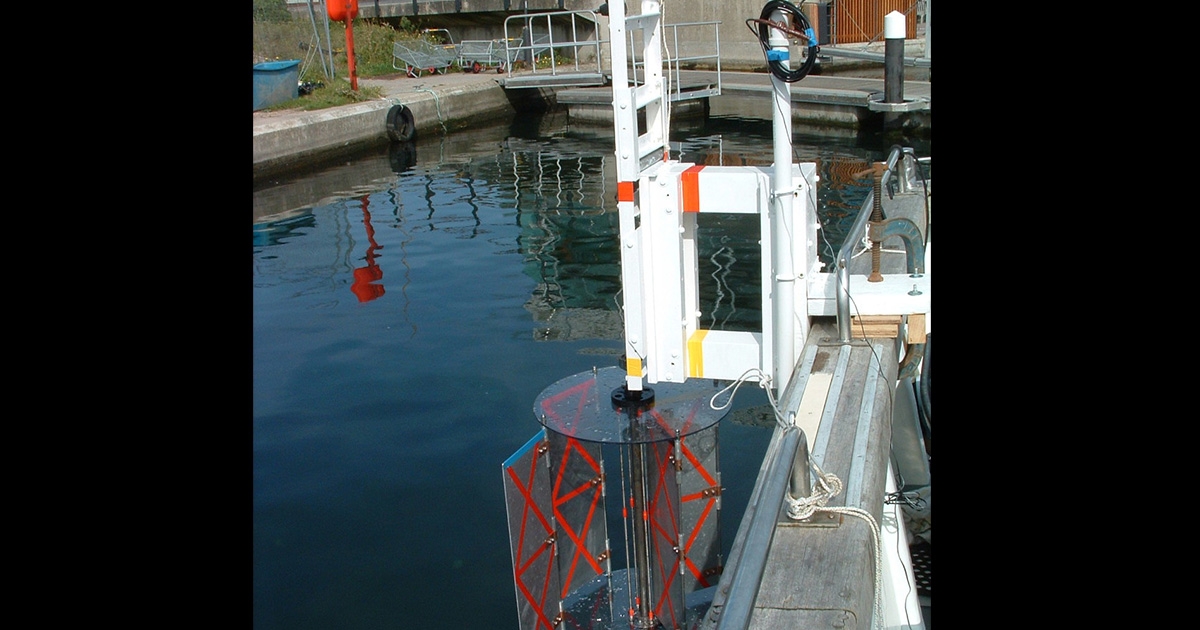 A small proportion of the Thames is to be illuminated using power generated by the flow of the river itself, as Kingston University tests prototypes of a new hydroelectric turbine design.

The turbine will sit on a pontoon and will provide a floating test and measurement laboratory. On this will be an array of sensors and monitors, including a TorqSense the wireless torque sensor from Sensor Technology Ltd.

"To say that this is a harsh environment for laboratory equipment is a bit of an understatement," says Rod Bromfield, Senior Lecturer, of the Faculty of Engineering, Kingston University. "We can only use robust kit with a proven industrial pedigree."

The turbine under test has been developed by Hales Marine Energy near Eastbourne on the English south coast and is expected to be deployable in tidal seas as well as rivers. The design application of this turbine is to sit on a submergible tank that will sit on the seabed and can be floated up to the surface when required. Significantly, the design is almost infinitely scalable: the unit under test is 1m diameter and produces about 1kW; 5m turbines suitable for inshore deployment would generate round 20kW; smaller units would be ideal for river use. With access to the test site being by small boat, Rod knew that his test regime had to be both simple and comprehensive.

"The critical measurement is torque, as this indicates the power we can derive from the system. We had to be certain that we would get continuous measurements over an extended period of time, because we need to map power production against actual river flow. Also, for this technology to succeed in the emerging green power market it must be capable of continuous and predictable energy production." One of the engineering issues that Rod faced was the relatively slow revolution of the turbine, in this test below 50rpm. This helped define the choice of the TorqSense, but it is also a key feature of the Hales turbine - the slow speed means less stress on moving parts and therefore less servicing. It also minimises habitat disturbance, so that the ecological impact is low.

"When I contacted Sensor Technology I was very concerned about vertical mounting and harsh environment performance," recalls Rod. "Fortunately, there have been TorqSenses installed vertically, including several high up on vertical axis wind turbines, where they have to withstand gales, hurricanes and lashing rain."

The design of the Hales turbine is reassuringly simple, and therefore likely to survive underwater installation with long service intervals. It was developed by Paul Hales, a design engineer who has spent a career associated with the sea. "It’s based on the traditional water wheel but mounted on a vertical axis - on its side," he explains.

"Using modern engineering and materials it is possible to take this effective early turbine and by turning the output shaft to the vertical to immerse the whole turbine into the tidal flow. To overcome the high resistance on the wheel blades that on one side are trying to move against the water flow, they are shaped and hinged to present a minimum resistance. The large blade area on the drive side produces very high amounts of torque (rotational force) at low speed, in the range of 10 -20rpm.

Coupled with modern permanent magnet generators that can start producing electricity rotations as low as 2rpm, my turbine can offer the possibility of tidal generation worldwide.”

Paul continues: "Water is nearly 800 times denser than air so it carries far more energy, making water turbines a very attractive alternative to wind energy. Notably seabed systems are not an impediment to shipping, nor do they have any visual impact and ecological issues are minimal for low-speed systems." Paul says that he could envision an array of his turbines on every headland along the English Channel and at intervals down the Thames.

"Of course, that is just the start. The simplicity of the design, its robustness and low maintenance, relative ease of installation all add up to making it suitable for deployment in remote and less developed areas. Its low ecological footprint addresses many of the issues raised by environmentalists. Its continuous and utterly predictable power output overcomes the intermittency associated with wind, wave and solar power.

"When, over the test period, people stand on Richmond Bridge and watch a modest array of lights bobbing about on a buoy, they may not know it but they will be seeing the future!"