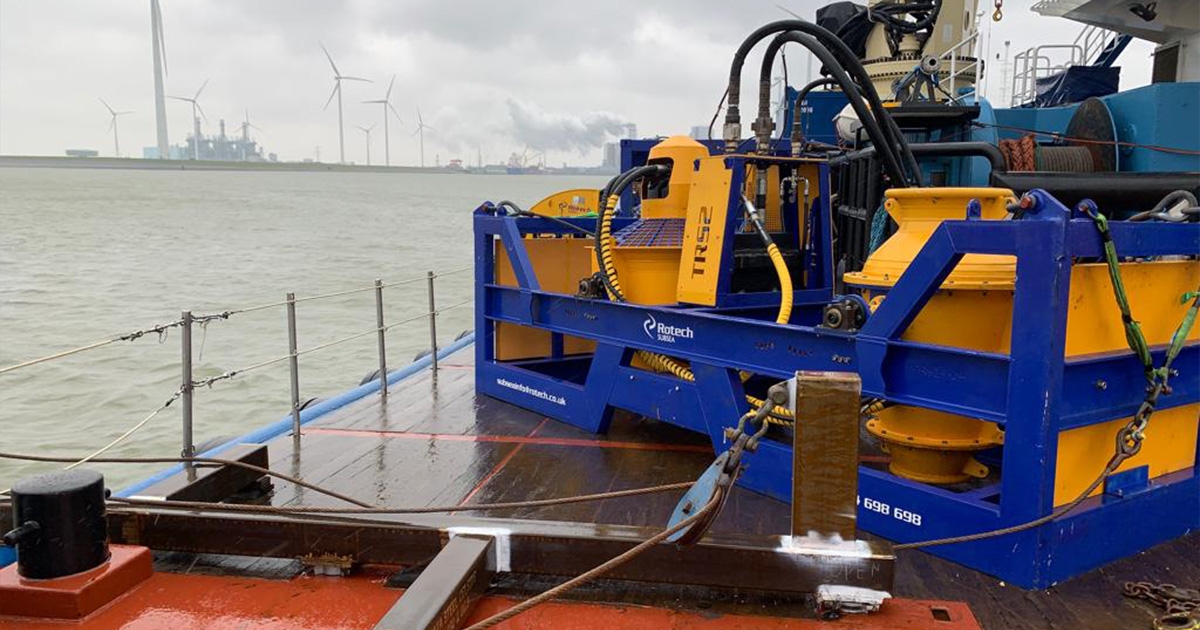 Operating in water depths between 3-13m in silty sands with intermittent hard layers, the RS1-2 tool buried one export cable at the first OWF to client specification of 1.5m with remaining export cables at two further OWFs lowered to 3m depth, or best endeavors, with possible hard and cemented areas anticipated to be encountered along the route. Currents were up to 2.4 Kts max with sea states 0.25–1m Hs.

Speaking about the trenching operation, Rotech Subsea Director of Subsea, Stephen Cochrane, commented: “This was another successful European cable trenching deployment for Rotech Subsea. On OWF1, the 1.5m Depth of Lowering was achieved with two passes, while on OWFs 2 and 3 the average DOL was 2–2.5mtrs, completed in two passes. The mobility of the seabed was very active on these sites with some areas gaining/losing up to 6mtrs over a season.

“Our RS1-2 hybrid CFE tool worked exceptionally well, completing the scope safely and efficiently, to the satisfaction of our valued client.”

Deployed from a vessel crane, forward & aft deck winches were used as orientation tuggers on the CFE tool, routed through snatch blocks fixed to pad eyes on the extended outriggers. The RS1-2 remained suspended above the seabed / cable along the route to complete all trenching operations with the vessel’s DP positioning system used to move the CFE tool along the cable RPL routes/areas requiring trenching works.

Tool mounted USBL transponders provided live data on the location of the RS1-2 to ensure operations were completed in the specified locations. Trench depth was monitored real time using a sonar imager mounted to the tool. A subsequent client survey confirmed that the trenching ops met the required specifications.

Rotech Subsea’s in-house research, development and engineering team has created a suite of 18 sector-leading non-contact CFE, Suspended Jet Trenching tools. With enhanced capabilities, Rotech Subsea’s CFE suite of tools is firmly established as the method of choice for offshore wind farm cable trenching and excavation in Europe and beyond.